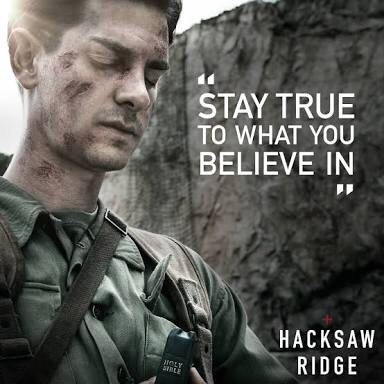 Just want to write a short reaction on the film Hacksaw Ridge that I recently watched which is now one of my favorite film. The film tells a true story about beliefs and really holding onto it despite what other people are saying. Desmond Doss was a World War II soldier that had a strong belief of the commandment that “thou shall not kill” it was said that he was the first soldier to became a conscientious objector which means “an individual who has claimed the right to refuse to perform military service”. He refused to hold a rifle which was really quite intriguing if you wanted to be a soldier but holding onto his beliefs Desmond Doss never held a rifle even after being threatened and beaten up about it. He wanted to be a combat medic and wanted to save lives while others are killing each other. I was moved by the high morality of Desmond Doss. He was so brave to save his fellow wounded soldiers by himself and he even saved some Japanese soldiers too. And I really loved how he fought and stood up for what he really believed in.
Got me questioning how strong are my beliefs and how far will I go to stand by it? Right now I think most people are easily persuaded and influenced by certain factors that can make a change in what they believe in, how most people follow trends just to stay “cool” and to not be left out “everybody’s doing it might as well do it too”
Friendly reminder: Just because everybody’s doing it does not mean you have to do it as well.
You are you and you don’t have to copy what everybody else is doing. You have your own mind and focus on what you want. Everyone of us is different, different perspective, different personalities and different beliefs so respect everybody’s beliefs even if it contradicts yours and don’t ever think just because what you believe in is different from what others believe in makes your beliefs wrong, I think that’s the time you have to hold on to it a bit tighter. But to answer my question on how far will I go to fight for what I believe? I actually don’t know but I hope I get to stand by it when the time comes.

How far will you go to stand by for your beliefs? 😊

Let me know what's on your mind... Cancel reply

Leakage... #madeincanva
It dies with me...
Art Is What We Live For
You are your greatest cheerleader! 📣
3 words are enough ❤️
Note For The Day!
Along the way...
To The Ones Who Aren’t Good Enough
Note for the day!

Copyright © 2020 by Joana J. Salazar
All rights reserved. The writings on this blog or any portion thereof may not be used or reproduced without the permission of the writer except for brief quotations and links provided to give proper citation and credit to the writer or to this blog giganticthoughtbubble.blog